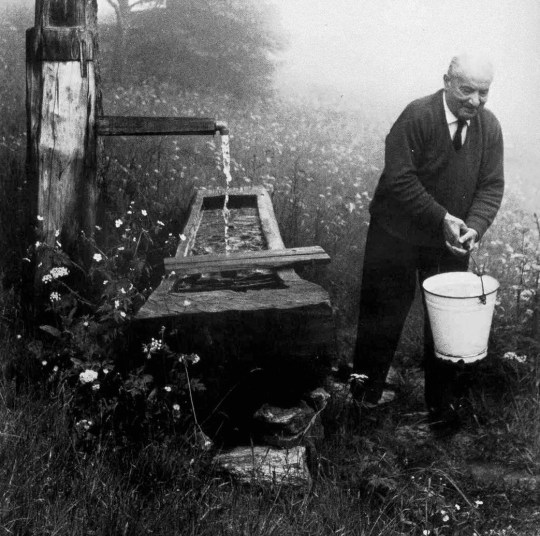 I write as a habit; to live a habit, a dwelling place, of writing. Habito in the Latin means to dwell. We dwell among our habits. This was a point Heidegger made in, I believe, What is called Thinking? But Heidegger took the habito in Latin and showed how it led etymologically to the ‘bin’ (the ‘ich bin’) of being. Hence to be is to dwell, to inhabit; and thus our habits are ways in which we dwell, and ways in which we are. So to form a habit of writing daily is to dwell in, abide in, writing daily, and thus writing becomes a way of being. Being and doing come together in this act.

But what is the object of writing? For Heidegger, to be human is to be concerned; to dwell in concern. For Paul Tillich, taking Heidegger and pushing him into the transcendent, to be human is to be concerned ultimately about our lives, which is called ‘faith’. And so what is the nature of dwelling in writing? To work out our ultimate concerns. This is called Truth. We seek out Truth as our ultimate concern. And what ultimately are we concerned about? Meaning, purpose, existence, hope, dreams, goodness, justice, mercy. Hence our dwelling in writing is dwelling in what concerns us ultimately and therefore an act of faith, and act of Truth.

But what is dwelling in faith? What is this dwelling, this habit? It is prayer. And thus this habit of writing, this daily dwelling in writing is prayer itself, is worship. A poet and friend of mine Nicholas Samaras says it is presence that makes worship. Writing, as a form of dwelling in attention, is thus worship, is thus prayer. To write in this way is to pray to the orchestrator and finisher of our faith, Jesus Christ–Being Himself, The One Who Is. (This Being of Christ upends Heidegger’s ontic, supplanting it to the mere ontological, a mere study of being without the real authentic experience of Being Itself. It may be the case that Heidegger revised his ontology on his deathbed when the Priest came to receive his confession–we can only hope.) And this is how we dwell in Christ creatively. We dwell in Him through our ultimate concerns that we articulate in our writing, and for which we seek redemption.

And this dwelling in writing, in ultimate concern, in faith, in prayer is authentic creativity. It is connecting our souls to God’s cosmic work, to the work He is doing through all of creation as He is everywhere and filling all things.

And so writing becomes habit, becomes dwelling, becomes faith, becomes prayer, becomes creative dance with God. This is why I am so drawn to writing, drawn to the place of prayer where my concerns are articulated–and not just the negative stuff, but also the beautiful too: to be close to God in prayer, in reflection, in writing. That is what this writing comes to: what concerns me ultimately: who i am, what I am here on this earth to do, and how to do it.

To seek Love, Joy, and Beauty, then dwell in it.

One Chance to See the World

The Blog of Author Steven Colborne

Better conversations toward a better tomorrow.

this is... The Neighborhood

the Story within the Story

Funny Blogs With A Hint Of Personal Development

Jottings Along the Way...

Faith, Writing and Everything In Between

The Casual Way to Discuss Movies

A daily selection of the best content published on WordPress, collected for you by humans who love to read.