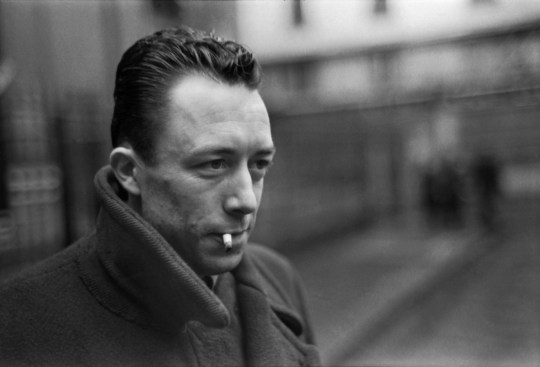 I was going to write about The Myth of Sisyphus, but can’t find the damn book. It’s late, and I’m prone to ambiguous sarcasm and slop.

I looked all over for the damn book. My shelves are stuffed with books of all kinds. I’ve got books on so many different topics that I can’t keep it all together. So many times I’ve wandered by the shelves only to berate myself that they’re all out of whack and there’s no order to ’em and I can’t find a damn thing when I need to.

What My Son Had To Say About Sisyphus

My six year old son even joked with me tonight just after I helped brush his teeth.

I said to him, “Look, if you find the Myth of Sisyphus let me know ok?”

So he went into his room and said, “Dad–I found the Myth of Sisyphus. It’s right here.”

He got me–for a split second.

“Just kidding!” And then he started to laugh a mischievous laugh. The whole thing was absurd anyway, I mean what kind of six year old kid can find the Myth of Sisyphus among thousands of books on several different floors of the house all in complete random order–it’s absurd.

And I would argue it’s just as absurd for a six year old to even mention the title of The Myth of Sisyphus anyway–I mean really, how damn absurd is that?

So anyway, I went looking everywhere for the damn book. It’s small. Paperback (I should buy a hard copy!). The perfect size to get tucked in somewhere between a book on the history of India and another on the Boer War.

Or squished in between one on the Ottoman Empire and another of the best of Garfield or the Far Side Gallery or something.

Ah–what I think it would best be suited next to would be (say) Slavoj Zizek’s Paralax View and Kierkegaard’s Either/Or–no, way too damn obvious.

How about Baudrillard’s America and Alice in Wonderland–no, way too damn obvious too!

How about the King James Bible and Herman Hesse’s Steppenwolf? All too linear!

I’ve got it–Barney Sharing and Caring and Karouac’s On the Road?

What bugs me, what really burns my backside, is that I have it somewhere! The threat here is that I somehow lost it or gave it away to someone and forgot about it. That’s why I should never give away books, especially those I think I’ll need in the future. But at that rate, I’ll need to buy another house just to store my books! (Not a bad concept actually. I’ve read about people like this–real bibliophiles: they’ll collect so many books that they need to buy another house to put them in. But not in these times–no. Now we have the cloud, so we can store stuff anywhere but in the physical world. But people need to still collect stuff and buy houses for them, so I’ve read now that people are buying houses just to serve as a giant walk-in closet. Imagine doing that for books? Buying a whole house just to put your books in–well, that would be a library I guess. But still, not a bad concept, really.)

So I was going to write about flaneury–no, not ‘flattery’ you damn spellcheck! For as I was looking for The Myth of Sisyphus I spotted a book on those writers who loved to go for long walks at night, such as Charles Dickens. I must say, I’ve never done that before. When I wake up in the middle of the night, and can’t get to sleep, my first inclination is not to get up and go outside in the dark and walk 20 kilometres through the city to another house; but that’s just what Charles Dickens was known to do. He’d get up–he was a terrible sleeper–and walk out of the house and wander the streets in the middle of the night. It sounds splendid, but I believe it just wouldn’t work as well out here in the suburbs of Calgary in -25 degrees celsius. It just wouldn’t.

But you see, Dickens did this, and he loved it–oh the writing that oozed out of him at the end of these walks! He wrote about how alive he felt after walking almost eight hours straight in the middle of the night and finally reaching his destination. The walks kept him energized–he couldn’t write without them!

I read that and then think about what it would be like for me to do that.

It’s 2am–can’t sleep. I get this frantic urge to go for a walk. Slipping downstairs, I stretch on my winter jacket and fumble around for half an hour in the dark for my gloves–can only find one . . . Then when I finally find my gloves, another ten minutes for my hat . . . Then I pull my knee high winter boots on, the ones that protect one up to -65 degrees celsius. I open the door as the wind blows a foot of snow into my doorway. I venture out, my heart pounding and this drive to be outside takes hold of me–oh the prose that shall pour forth! Then, I get about two blocks down the street and am overtaken by the cold. My face freezes up, my feet slip on a glassy surface of ice, and I tumble into a snow bank where I freeze to death belly up. Then–it starts snowing. 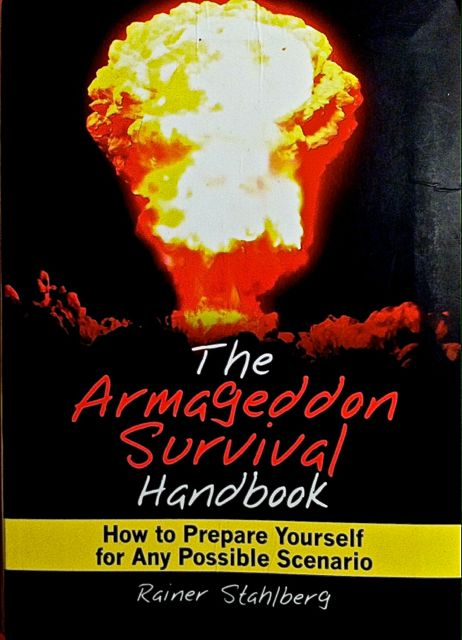 This is a book I picked up at a garage sale for a surprising–and unwarranted–mere fifty-cents. Indeed, it’s worth much more than that. In this book, Stahlberg–a Hungarian-born writer who left Hungary after surviving the uprising of 1956–takes one through a series of very carefully observed scenarios all of which have a high level of plausibility, regardless of their seemingly alarming or far-fetched nature within conventional consciousness. No–this is a serious work, and I highly recommend that all of you who stumble upon this blog and read these words order yourselves a copy.

As a ‘civilization’ (and I use that word almost in jest), we are at a cusp point at which the systems that we have put into place are starting to run us, not the other way around. As Kevin Kelly argues in his book regarding technology, these systems are indeed eco-systems: they have a life of their own, and emerge spontaneously and capriciously. This cusp point is demanding that we has human beings apply ourselves to learning a whole new set of skills: in our thinking, and ability to access and systematize information, in how we design and create (and I use these words very deliberately and literally) new life-solutions that are separate from the market fetishism that words like ‘design’ and ‘create’ have been applied to ignorantly and in complete bad faith, and in how we skillfully apply our thinking to surviving on this planet. Life on earth is being pushed to the edge of a cliff–a force that we put in motion centuries ago, but has now taken on a life of its own and is now pushing us. Many claim it is indeed too late–we should cut our losses, and just hope for the best. If it is indeed too late, or we are on the brink of ‘lateness’, then we need to seriously think about and plan how we’re going to survive in a world when all that we have learned in the past, over generations of cultural and manufactured practices of producing and consuming, is obsolete. This can be a renaissance of human creativity and ingenuity, and it can be just as much a time of catastrophe, chaos, and collapse–I don’t see any reason why the two will not co-exist.

The video above is archer Lars Anderson whose meticulous and tireless study of his craft led him to discovering ancient archery techniques that have lain largely dormant for centuries. This is one example of a skill that is important for one to consider, quite simply in the event that we are all left to survive as hunter/gatherers again–and no I’m not talking about Walmart.

This also means that children will need to be educated in completely different ways as well: not so much specifically on the theoretical maths and sciences, i.e. educated as specialists, but more as generalists who can access multi-disciplinary information, collaborate with each other, and design, build, and use stuff. In such a model, designo is just as critical as scientia. Our children will need to learn survival skills also, in spite of the culture of helicopter moms and dads who–contrary to their own upbringing–hover over their armoured kids and don’t allow them near knives and fire and hammers and nails. Nevertheless, the world may be at some point soon divvied up among those who are prepared for these capricious unpredictable times and those who are not. The difference between the two is simply a matter of 1) admitting to yourself and others that we are at a tipping point of human civilization, and 2) taking the time to learn about these issues and put real intentional plans in place for your family’s and your own protection and survival. What Stahlberg’s book does successfully is begin that self-realization and the dialogue among those around you. But time is running very fast, the world is growing more complex, and change is emerging well beyond our ability to immediately react–and it is only getting more intense.

My research and professional work as a writer and educational designer are centred on these issues. I have worked with world leaders on these very issues that Stahlberg, and others I will write about here, outlines in his book. These issues are not mere ‘hot button’ issues to be carelessly broached for entertaining dinner conversation, but are shaping our social, economic, political, religious, and ecological world as we speak. I will be posting more of this material here from my research. Moreover, I am in the process of writing a book on these issues from my experiences internationally and pedagogically, parts of which I will also be posting here as they emerge. In my experience, leaders of our world are drawing out plans in the several decades, even into the hundreds of years–we who are stewards and occupiers of this world must do the same.

One Chance to See the World

The Blog of Author Steven Colborne

The home of poetry

Better conversations toward a better tomorrow.

this is... The Neighborhood

the Story within the Story

Funny Blogs With A Hint Of Personal Development

Jottings Along the Way...

Faith, Writing and Everything In Between

The Casual Way to Discuss Movies

A daily selection of the best content published on WordPress, collected for you by humans who love to read.